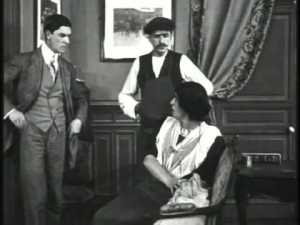 With this film, I can see Feuillade’s development towards “Fantomas” and other crime serials for which he is remembered. Bearing in mind that I’ve only seen a small sample of the over 700 movies he made for Gaumont Studios in France, the thing that has stood out up to now is the range and diversity of his movies. This time, he produced something that appears to be a direct antecedent of his most famous works, even introducing his future master criminal, René Navarre, in the role of a private detective hired by an unscrupulous corporate executive to get the formula for artificial rubber from a hapless scientist. Navarre uses an intoxicating gas to render his rival’s secretary unconscious, in order to steal her hat and coat, so that he can impersonate her and steal the telegram that tells when and where the scientist will arrive. The audacity and outlandishness of the plot, of course, just makes it all the more certain it will succeed, and the detective then has the outrageous good fortune to be hired to be the man’s bodyguard! He kidnaps him and brings him to his masters, who wear masks and conspire in an underground grotto. But, the scientist has the last laugh when he gives them the formula in disappearing ink. The externals are more limited in this movie than some of the other Feuillades I’ve reviewed recently, and the whole thing is slowed down a bit by extensive use of text such as telegrams and intertitles to move the plot forward, but it was very interesting to see Navarre establish his scheming on-screen persona.