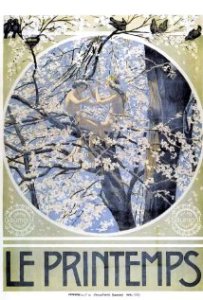 This is a more sophisticated example of Louis Feuillade’s early work than the movies I’ve reviewed recently. It seems to be more in line with his concept of cinema as an art form, and apparently took some time to create. Various images of nature are shown with women and children dressed as fairies dancing or interacting with the surroundings. As the film progresses, we note that the trees in the background change from being bare, to budded, to flourishing in flowers and leaves. Many of the shots have the camera’s aperture partly closed down, creating a small, oval-shaped or circular frame, which adds to the impact of the shots with the aperture fully opened. The whole piece seems to be a reflection on classical myth, as well as on the timelessness of the change of seasons.