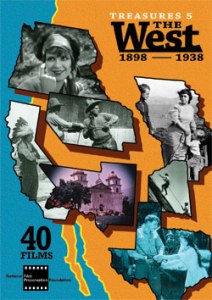 I’m going to have a hard time finding enough adjectives to express just how impressed I am by this collection. The films are fascinating, the visual quality is excellent, the music is delightful, the commentaries and historical notes are informative, and the overall package is charming and attractive. I have a few mild criticisms, but these should be ignored by anyone with an interest in the material offered: it’s entirely worth viewing.

The set comes with three CDs and a 110-ten page booklet (or book) of program notes. To begin with these, they consist of a brief introductory essay, followed by a rather longer essay on the music, then individual notes for each of the forty-or-so movies and film clips. There is an index (!) and some information about the institutions and individuals that made this set possible at the end. My only real complaint about this is that overlong essay about the music at the beginning: this would have been more useful had it been chopped up and put into the notes for each film – finding the part about the movie you are watching now is difficult. I’d also have liked to see brief bios for each of the commenters.

The movies themselves are a great mix of material about the West, many of which give us new perspectives on old tropes. The major find for me was the feature film “Salomy Jane,” which was the reason I ordered it in the first place, but as my reviews of Westerns in recent weeks should show, I discovered a lot of things I hadn’t known about here. There are also a great array of movies too new to be included in this blog at this time, perhaps most notably “Mantrap” from 1926 and a 55-minute excerpt from “Womanhandled” (1925). The other minor point of criticism I had was of the commenters, some of whom don’t add a lot of context to the films, more or less just adding a running narration of events on the screen that are clearly visible without them. These are exceptions, however, and I would recommend checking out what each has to say, especially about the shorter movies. In all, I think this is one of the best collections of Century Films and related materials I’ve seen so far.