Stuntwork is the black sheep of the modern film industry. Not included in the Academy Awards, professional stuntmen and women work in the shadows of the more famous stars and live largely unknown and unnoticed by the public, which nonetheless thrills at their accomplishments. In the early days of the film industry, most actors and actresses did their own stunts – it was expected – although occasionally a double would be found for a particularly challenging shot.

Stuntwork was vital to the slapstick comedies that were so popular before words added verbal comedy to the range of possibilities for the industry. Thus, we have two nominations for the surprisingly agile Roscoe “Fatty” Arbuckle. In “Leading Lizzie Astray,” he plays a physical giant who destroys a wall and takes on a whole team of bad guys, while in “The Knockout” he performs an elaborate series of moves as an aspiring boxer outclassed in the ring by much more able opponents (with no less than Charlie Chaplin as the unfortunate ref). Jack Holt took on the stunt-double’s work for William Pike in “Salomy Jane,” falling down a cliff into a river, and trained acrobat Pierre Couderc gives us flips and falls as “The Patchwork Girl of Oz.” Finally, Pearl White undertook a number of harrowing situations in “The Perils of Pauline.”

The nominees for best stunts for 1914 are:

And the winner is… Pearl White and others for “Perils of Pauline!” 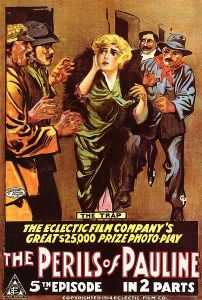 Pearl White got my attention in the very first chapter of the serial, when she scaled a rope from a balloon onto a beach, and she never let up in getting herself into and out of trouble in dangerous ways. Although it’s possible a double was used (and that balloon was never quite so far off the ground as it seemed), the stuntwork in this serial is outstanding, and holds up a century later as a remarkable achievement.