In the earliest days of film, action was performed in real-time, and no editing took place, but even the simple visual effects of Georges Méliès required in-camera editing by stopping and starting the camera at key moments. By 1914, narratives were created through multiple shots and structured by combining them to create meaning. Directors came to see that tension could be built by cutting away from action before its resolution, and audiences could be given information (for example through the use of a close up) to which the characters were not privy. And a complex situation, such as a battle, often could be better decoded by using multiple camera angles and cutting between them.

Each of the movies selected for this category demonstrate the height of editing at the time. “Tillie’s Punctured Romance,” a rare feature-length comedy, uses editing between different camera set-ups to produce hilarity and mayhem. “The Avenging Conscience” inserts grim imagery into the storyline to effectively produce a feeling of dread. In “The Squaw Man,” a man is assassinated by a sniper while apparently killed in a gunfight, with the editing making this clear to the audience even though it is secret to nearly all participants. “The Massacre” demonstrates D.W. Griffith’s increasing mastery of the use of multiple camera angles in a bloody and chaotic battle scene. “The Last of the Line,” like both of the two previous films, also heightens the drama of a battle by showing the audience what the characters cannot know.

The nominations for best editing for 1914 are:

And the winner is… “The Massacre!” 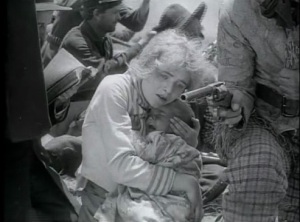 The editing in this short really stood out to me, even though it was actually completed more than a year before its release, demonstrating why Griffith is remembered as one of the masters of the early period of filmmaking. In addition to the battle itself, the tension is built through inter-cutting to the hero riding off to get help and the cavalry’s charge to the rescue. I didn’t see better editing in the entire year.