It’s been said that “clothes make the man,” and the clothes an actor wears can help to create a character that stands out to an audience and informs it about the history and personality of that character. Each of the nominated films in this category exemplify that, with “Cabiria” and “Judith of Bethulia” standing out as “costume dramas” set in antiquity, “In the Land of the Head Hunters” taking advantage of native ritual garments to create an otherworldly experience, and “Magic Cloak of Oz” giving us a fantasy world where humans dressed as animals and fantastic beasts interact with women dressed as men.

The nominees for best costume design are:

And the winner is…Charlie Chaplin for “Kid Auto Races at Venice, California”! 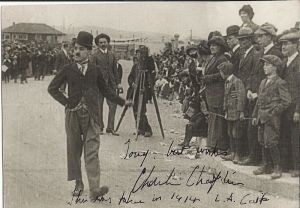 I gave away at the outset who the winner would be, because I don’t think there’s any more iconic costume from 1914 than Charlie Chaplin as the “Little Tramp.” While “Kid Auto Races” was hardly his best movie of the year (it’s more like watching a screen test), it was the movie that introduced the world to Chaplin in the clothes that would become inextricably associated with his name and his fame. Out of costume, he was rarely recognized, but in costume, he was the man loved by everyone. The Century Film Project is pleased to honor his achievement.