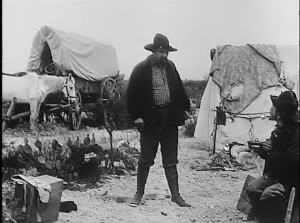 This was one of the movies D.W. Griffith made on his first journey to California for Biograph, and it makes good use of the desert outside LA for a bleak setting. An old miner and his daughter (Marion Leonard, also in “A Burglar’s Mistake” and “And a Little Child Shall Lead Them”) are preparing to pack up and return to civilization, when a Mexican-looking “desert wanderer” (Dell Henderson, who we’ve seen in “The Usurer” and “The Sunbeam”) stumbles into the camp. She’s off getting water, so the villain kills the old man and takes his gold. She buries him and vows revenge. Soon, he’s stumbling around lost and desperate for water, when the girl rides up in her covered wagon. She revives him, not knowing who he is, and soon they are in town and beginning a courtship. When he proposes to her, of course, he shows her all the money he has, in a purse she recognizes as her father’s! She overcomes her emotions and grabs his gun, bringing him in to the sheriff and apparently getting a reward to boot, but the only reward she cares about is the opportunity to go to a lonely grave and say, “I did it, dad.” A fairly typical example of the shorts Griffith was turning out like sausage at the time, boosted by Marion’s performance and the desert backgrounds.

You can watch it for free slightly edited: here (first scene missing)