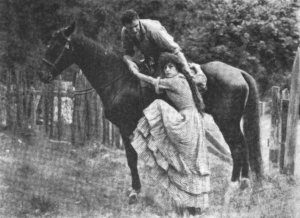 This early Western was shot around the Bay Area and in the Redwood Forest, and makes good use of the landscape as an important feature of its story-telling. It takes place in the town of “Hangtown,” a city with few women, and the kind of saloon where everyone ducks when someone new comes in the door, in case shooting is about to break out. When and old man and his young daughter (Beatriz Michelena, a bit more on her in a moment) move to town, everyone takes an immediate interest – apparently the old man is from a family in Kentucky that had a feud with one of the local families, and the daughter is, well, a not-unattractive woman in a town full of men. Of course, a heroic man rescues her from a villainous one. The movie was meant as a breakout vehicle for Michelena, who had been acting and singing on stage since she was 11 and was married to local car dealer George Middleton, who promoted her as the next big thing. She never was that big, but she does go down in history as the first Latina movie star, and apparently this is the only surviving complete film of hers today. In this movie, they had her wear a large wig that seems to have been borrowed from Mary Pickford, and, to my mind, doesn’t work for her facial features.

I have been unable to find this for free online, please comment if you can find it.