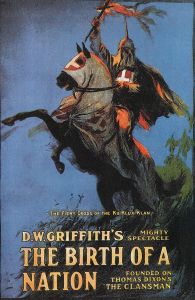 Up to now, my reviews have been quite short. This is not a mistake: I want to cover as many films of each year as I can, and I want to make my discussions accessible. I also see them as potential jumping-off points for more detailed discussions in the comments. For this year, however, I’m making an exception. The legacy of the movie “The Birth of a Nation,” by D.W. Griffith is too much to handle in a single post of a few hundred words, so I’m giving myself all year to unpack it. This represents its powerful impact on film history, but no less its controversial and problematic content.

Let’s start with that. This movie is a blatant glorification of the Ku Klux Klan of the Reconstruction Era South and a continuation of the “Lost Cause” narrative of the Civil War which furthered the cause of white supremacy by framing the South as the noble victim of Northern industrial and technological advancement. The movie was so powerful in delivering this message that it facilitated the rebirth of a new KKK in America, which became a powerful political force throughout the country by the early 1920s and was still active in fighting the Civil Rights movement a generation later. As late as 1988, former klansman Thomas Martinez claimed that KKK-inspired organizations would use the silent movie as a recruitment device, more than 60 years after the introduction of sound film. In short, the movie is racist, and at least part of its legacy is racism. That’s all pretty obvious, but it has been known to get lost in discussions about how important, groundbreaking, original, etc. the film was. Perhaps more importantly, many people at the time, including D.W. Griffith himself, actually didn’t believe that it espoused race hatred. In short, it makes the movie a case study in the ways that a society glosses its own prejudices, until enough things change to make it obvious. If some people in 1915 couldn’t see the racism in “The Birth of a Nation,” what are we missing in 2015?

See for yourself: here.