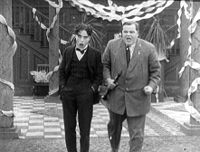 Charlie Chaplin heads up an impressive cast of Keystone stars (I’m not even going to try to list them all below) in a simple slapstick farce set in a dance hall. He has no mustache, his clothes seem to fit better than they usually would in “Little Tramp” getup, and he only seems a bit drunk at the beginning, when he falls down while dancing with a couple of girls waiting to get in to the hall before trying to give his hat and cane to dance hall patrons. He fights with Ford Sterling and Roscoe “Fatty” Arbuckle over the hat check girl, Sadie Lampe. We’ve seen all of them in recent reviews. Here, Ford is the band leader and Fatty is the clarinetist, and apparently tremendously strong (at one point he threatens Ford by picking up a dancer and holding him over his head). Just about every other Keystone player shows up in the background, sometimes getting drawn into the fight. Several of the background dancers are in costume, and we see a Keystone Kop dancing with a man in prisoners’ garb. Were “masquerades” common in dance halls at the time, or was that meant to be strange? I don’t know, but two men dancing together surely would have raised eyebrows, outside of a comedy or one of “those” places, I think.