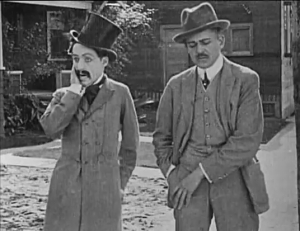 This film actually comes before Chaplin’s appearance as “the Little Tramp” in “Kid Auto Races at Venice.” Chaplin wears a similar outfit, with cane and baggy pants, but he has a stovepipe top hat, a long grey coat, and a large mustache with a more villainous look to it, similar to his appearance in “Mabel at the Wheel.” He is an unemployed man who tries to panhandle a reporter (played by director Henry Lehrman) before hitting on the reporter’s girlfriend (Virginia Kirtley, also in “Mabel’s Dramatic Career” and “A Flirt’s Mistake”). They fight, and he manages to scoop the reporter by stealing one of his photographs and rushing it to press, then running out and selling copies of the paper himself. In the process, several run-ins and chases take place, including a woman (Minta Durfee, who was in “Fatty Joins the Force” and “The Knockout”) with a jealous husband, and several Keystone Kops, who wind up chasing Lehrman, while Charlie gets into yet another fight with the husband. Interestingly, this is a much more complex and sophisticated film than “Kid Auto Races,” which essentially used ad-lib comedy and an exciting location to carry the film, while this is scripted and employs varied camera angles, tight editing, and even a traveling shot of Charlie running down the street (presumably the camera was mounted on a car in front of him).