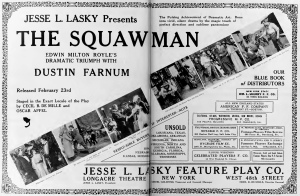 In spite of the gender-bending title, this is neither a story of an Indian girl who becomes a man, nor a man who becomes a squaw. Rather, it is the story of a dishonored white nobleman who marries an Indian woman, and as such is an opportunity for commentary on race, gender, and class, all through the lens of “honor” as it was understood at the time. Predictably, the resolution involves the death of the unfortunate squaw, and the white man’s restoration to his proper civilized context, although apparently their child (conceived out of wedlock) is due to be raised as the “next Earl of Kerhill.” This was Cecil B. CeMille’s first outing as a director, and also the first feature film to be shot in the area of California later designated “Hollywood.” The story behind it is nearly as interesting as the picture on the screen, and it also represents a pretty impressive debut at a time when movies were generally made as simply as possible. I was impressed by the angled closeup used to demonstrate a pickpocket at work, the use of splitscreen to show a flashback, and the (real) locomotives that were integrated into the town saloon/railroad station set. The story, which seems obscure today, was derived from a popular novel which had several successful stage adaptations.