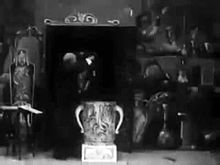 This is another British Méliès-inspired “trick” film, but director Walter R. Booth comes with a very full bag of tricks indeed. An old man who runs a junk store discovers that various items in his possession have minds of their own and magical powers. These include a floating transparent woman, who is cut in half and re-joined, an animated skeleton, mummy, and a suit of armor, and a large vase or cauldron out of which playful dwarves emerge and frolic about. I’m not sure if it’s just cultural, but somehow the British approach to this kind of film seems more in line with the atmosphere I expect for Halloween (see also “The X-Rays”). It is child-friendly and not overly horrifying, but it’s somehow more atmospheric and not as strictly humorous as in the case of Méliès. Booth had done some earlier trick films, such as “The Human Flies” in which a group of people suddenly find themselves on a ceiling, but this was his most advanced effort to date and included several camera tricks, rather than just one. Technically, he was still lagging behind Méliès, who had done this years before, but he seems to me to have an interesting style of his own.