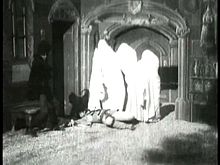 For my history of horror, I’ll probably wind up talking about several different movies which have been claimed as the “first” horror movie. This is probably the earliest of those, for what it’s worth, but it’s also probably the hardest to nail down as “really” being a horror movie. Made by Georges Méliès very early in his experimental period, it is clearly meant to produce more chuckles than shudders. Nevertheless, the use of bats, demons, boiling cauldrons, skeletons, and classically “sheeted” ghosts all evoke the images we associate with Halloween and horror today. Méliès himself appears as one of the hapless “cavaliers” who wanders into the castle, and he uses a variety of simple camera tricks to make things appear and disappear, or move about by themselves, while the befuddled cavaliers turn on one another or look on in wonder. Interestingly, the Devil, who makes an appearance, is not played by Méliès, who may not have figured out how to “double” himself on the screen at this time (or who may have thought it too much work to bother with). Considering how early this movie is, it is still impressive in its ability to entertain, although I doubt if it ever scared anybody.