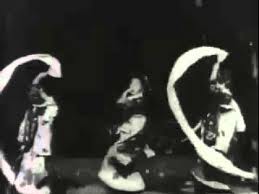 Film came early to Japan, but even before that happened, Japan came to film through this Kinetoscope short. Filmed at the Edison Black Maria studio, it shows three young women performing a dance from the Mikado, and the original Edison catalog noted that it was “very effective when colored” suggesting that at some point it was possible to get a hand-painted print (probably not in 1894, though). As we’ve seen in recent posts, many of these Kinetoscopes were made to show performers in movement, and dance is a particularly good genre for that kind of presentation. I’m sure that American audiences found the costumes and formality of this piece intriguingly exotic, and in that sense it is a demonstration of film’s capacities for making the foreign more familiar and also for commoditizing culture. The women in the film are identified as the “Sarashe Sisters” and I was unable to ascertain if they were actually Japanese, Japanese American, or other Asian-Americans made up for the role. The Mikado, of course, was a familiar Gilbert & Sullivan comedy from 1885, which uses Japan as a location in order to disguise its satire of British politics. In that sense, nothing about this film is “authentic” and yet for many Americans of the period, it may have represented as much as they knew about Japan.