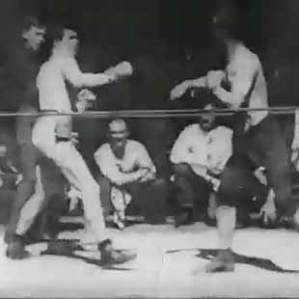 This early Edison Kinetoscope example returns to several of the themes I’ve been discussing lately. As I mentioned in “Men Boxing,” the art of pugilism was of special interest, not least because it was banned in the United States at the time. That is, it was illegal to organize, participate in, or attend a boxing match, not necessarily to photograph one (the law hadn’t thought that far ahead). Since it was legal to look at a still photograph of a boxing match, it must be legal to look at a motion picture as well (again, it was too early for anyone to argue that the movie constituted evidence that someone had organized and participated and that at least the cameraman had attended the match). So, here the filmmakers shrewdly found a way to give part of the public what it wanted, and couldn’t legally get otherwise. However, bear in mind that this is of course a fake. No one took a camera to a fight to make this; instead, the boxers were brought into the Black Maria in order to stage a performance of a fight in front of the camera. The film satisfies the thrill of the forbidden both by pretending to be an actuality of an illegal event, and also through the very skimpy outfits the fighters wear.