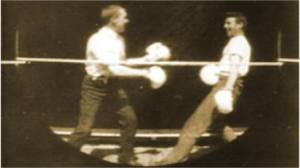 This early film experiment is a window into the nature of illusion in another age. It’s not, as it at might appear to be, a recording of a boxing match, but rather a simulation of such a match, on a rather minimal set, involving two non-boxers and non-actors who sort of vaguely wave their gloves at one another for a few seconds. Why fake such a subject? It so happens that boxing for money was both illegal and wildly popular in America at this time, and it’s likely that the Edison team wanted to demonstrate their ability to make imagery of this sport available to an eager public. This particular film was never publicly displayed, but that may not have been the point anyway – this could have been along the lines of an “elevator pitch,” a short presentation intended to convince corporate higher-ups that there was commercial potential in the new technology of film. Technically, this is a noted improvement over the “Monkeyshines” experiments of just two years earlier. The figures are human and identifiable as individuals, while the motion is natural and properly paced. Further evidence of the speed of film’s advancement.