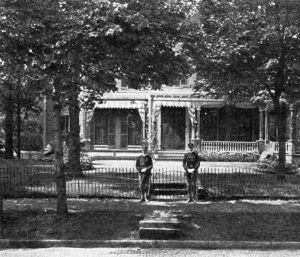 For today’s Independence Day post, I’m talking about the first known film footage of an American President, although this was taken shortly after his nomination as the candidate for the Republican Party. In his book, Billy Bitzer lists this as one of the first movies he worked on, more than a decade before his famous collaboration with D.W. Griffith. He would have been only twenty two years old at the time, and was working as an assistant to WKL Dickson. I’m not actually certain which one shot the footage, quite possibly it was Dickson, but I’m listing Dickson as director and Bitzer as cameraman for clarity. Like much “documentary” footage of the time, this was actually a re-creation of McKinley receiving the news of his nomination. He portrays himself as calm and self-possessed, rather than emotional or excited. which was probably the image he wanted to give American voters. In that sense, this may be the first example of a political advertisement on film, although Dickson may not have  intended it as an endorsement. The man who gives him the news is McKinley’s secretary, George Courtelyou, and his wife Ida can be seen as a shadowy figure in a rocking chair, in the background.