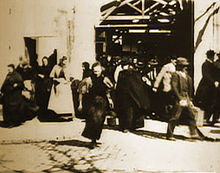 This was the first movie that the brothers Lumière shot using their newly-developed camera, the Cinématographe, and it was among the first which they exhibited at the first proper projected screening of motion pictures. That doesn’t make it exactly the “first movie,” but it is certainly a highly historically significant film. What it shows is a group of people, as well as a dog and a horse-and-carriage, exiting a large indoor space via a set of doors. The workers are actually employees of the Lumières at their factory. It is both an “actuality” (or documentary film) and also a fiction; the workers are not actually leaving to go home, but rather simply being directed by Lumière to exit in order to provide movement. The shoot was probably done in the middle of their workday, and since three separate versions or remakes exist, it is apparent that they repeated the action several times, as in repeated takes. All of which simply demonstrates the close alliance between reality and fiction in film from the very earliest days. No film is ever wholly fantasy, since one has to make some sort of image in front of a camera to put on the screen, nor is any movie ever wholly spontaneous and “real.” And, of course, remakes are as old as film itself.