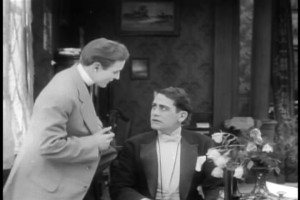 In classic Griffith fashion, this short film uses cross-cutting to contrast the lives of two newlywed couples, one rich, one poor, in order to make a social comment about the way we treat dishonesty at different ends of the income spectrum. When the poor man (Charles West, who we’ve seen in “The Unchanging Sea” and “The Burglar’s Dilemma”) cannot find a job, he finally breaks and tries to steal from the rich man’s (Edwin August, also in “The Eternal Mother” and later appeared in “The Magnificent Ambersons”) home. Said rich man has just accepted an offer of a bribe for his “vote” (I assume on a committee of some kind, since surely his vote on a ballot measure wouldn’t count for more than anyone else’s) in favor of a new railroad. Rich wife Blanche Sweet (from “The Painted Lady” and “Judith of Bethulia”) catches the would-be robber and holds him at gun-point, but, finding out about her husband’s illicit dealings, lets him go and upbraids her spouse. Chastised, the rich husband returns the money and offers poor Charles a job, apparently in a brickyard he owns. The happy ending probably pleased both working class viewers, who enjoyed seeing the rich man shamed, and the more middle class of film audiences, who wanted to believe that honesty pays off.