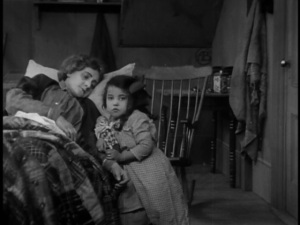 We don’t generally think of the death of a parent as a good opener for a light comedy about a child. Nor is the threat of scarlet fever outbreaks in tenements usually seen as a subject for humor. But, D.W. Griffith made it work in this, one of his most memorable early shorts. The “Sunbeam” is his nickname for an adorable 4-year-old child (Ynez Seabury, who would later appear in “The Invisible Ray” and “Reap the Wild Wind” during the sound era). When her mother (Kate Bruce, also in “The Mothering Heart” and “The New York Hat“) passes quietly away, she runs out in search of other playmates. She fixes on a spinster (Claire McDowell, whom we’ve seen in “The Usurer,” and who later was in “The Mark of Zorro”) and a bachelor (Dell Henderson, who was in “The Unchanging Sea” and “His Trust”), who conveniently live across the hall from one another. At first, the two are crotchety and resistant, but the Sunbeam breaks down their resistance and gets them to be nice to each other, and to her. Then some local kids stick up a “Scarlet Fever” warning on their door and they are forced into quarantine together for a time, ultimately assuring that the new family unit will gel. It’s pretty silly, but undeniably as charming as Ynez herself.