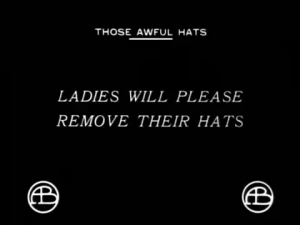 This early short from Biograph is both a comedy and an informational promo. It shows a small audience in a Nickelodeon-style theater watching a movie. One at a time, several fashionably-attired women enter and find seats near the front. Each wears a hat which is adorned with a floral bouquet, and soon it is impossible for anyone to see the screen because of them. Towards the end, a giant claw descends from the ceiling and removes, first one of the hats, then one of the women! The audience applauds and the final intertitle states “Ladies will please remove their hats,” making this 3-minute reel an ideal opener for a program of shorts, equivalent to the “Let’s All Go to the Lobby” cartoon or reminders to turn off cell phones in later years. Sharp-eyed viewers will notice that an “AB” logo at the front of the picture, near the on-screen movie screen. This was how movie producers were protecting their copyright at the time, I believe it started at Edison Studios: they would have a physical logo planted somewhere obvious on each set they shot. It’s sort of like the watermarked-logos we see on television stations today, except that it actually was a physical object. Mack Sennett, who would go on to found Keystone Studios, is one of the featured patrons.