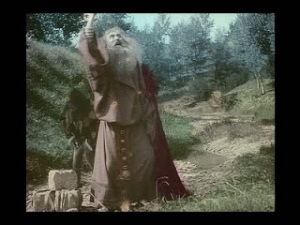 One of the interesting things about silent movies is how readily they adapt subject matter across cultures. This is the first Shakespeare film I’ve talked about from a non-anglophone country, but since the emphasis is not on dialogue, there’s no sense of anything “lost in translation” between English and Italian. It also is the first film I’ve discussed which includes some hand-painted scenes and some tinting, so, in effect, a color film. There were many color film experiments in the silent era, and some studios employed large numbers of low-paid painters to apply color to movie strips by hand. The effect, when done well (as it is here) is striking and somewhat ethereal, since the hand-painting varies slightly from frame to frame. In terms of telling the story of King Lear and his daughters, I found some of the choices here interesting. The good daughter, Cordelia, is portrayed in the opening as somewhat taciturn, maybe even dour, and one can understand Lear’s preferring his more vivacious-seeming daughters. They also spend a good deal of time on a setup in which Lear compares his unfeeling daughters’ hearts to a stone, which it seemed to me might have been better blended with the previous scene of their betrayal, since all the actor has to do is talk to his servants, where a confrontation with his daughters would have been more visually interesting. There is no attempt to add a happy ending, and this comes off as the most “adult” or sophisticated century Shakespeare thus far.