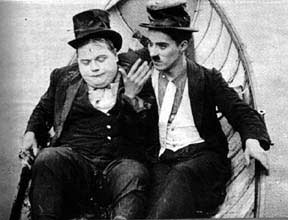 Today is Charlie Chaplin’s 125th birthday, so I thought I’d take a break from the Edison shorts I’ve been reviewing and talk about another of his classic comedy reels from 1914. This one also stars Fatty Arbuckle, who was a major slapstick star at Keystone even before Chaplin arrived on the scene. I’m hoping to review some more of his work in the coming weeks. Here, the two of them portray standard comedy drunks. Doing drunks on Vaudeville stages is how Chaplin got his start, in fact. We tend to think of him as a lovable victim of society, but as a drunk he could be aggressive and foolish as well. Here, he and Fatty arrive home and fight with their wives, eventually linking up to go out in search of more booze (with money Fatty steals out of his wife’s purse), eventually causing chaos at a posh restaurant when they stagger in. Fair warning: the doorman at the bar is a white man in black-face, which is a reminder that what was acceptable humor in 1914 may not be OK 100 years later. The entire cast consists of some very talented pratfall artists, and you’ll be surprised at the stunts being pulled off by minor players. The movie includes several locations: a hotel where the couples live, the restaurant, and a quite recognizable park used in many Chaplin films, making this one of the more complex shoots he worked on at Keystone.

You can watch it for free: here (this is a good-quality print with no music or intertitles). Or here (inferior print that is 3 minutes shorter, but has music and intertitles).