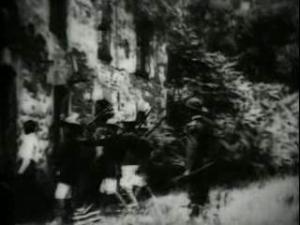 In April of 1898, the United Stated went to war with Spain, and the face of American cinema changed forever. Suddenly, instead of showing amusing snippets of daily life or panoramas of interesting locations, the movies were showing “news,” depicting important events “as they happened,” and showing American troops in the most positive light. Even outside the US, Georges Méliès made a movie depicting the sunken USS Maine, a catalyst for the conflict. This movie claims to document the execution of prisoners in Cuba, which made me think it might be the first “Faces of Death” movie. I quickly realized, however, that it was staged (which is appropriate, actually for “Faces of Death”). The next movie on the LOC’s website, “Cuban Ambush,” is shown at exactly the same location and camera-angle, and the coincidence of the two events occurring in the same place, without so much as a repositioning of the camera, is too incredible to be believed. I suspect audiences at the time were not aware of this, even if they did see the movies at the same time; they were not used to “reading” film critically the way we do today. What I wonder about is their reaction: Shock? Digust? Cheering? Were they respectfully silent toward the fallen enemy? Or were they glad to see justice done?