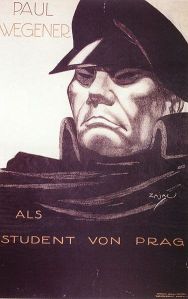 What defines a horror movie? If it can be defined by the presence of a supernatural antagonist which threatens the protagonist and other characters with death, then this movie qualifies as an early example (though probably not the first). In it, Paul Wegener (later to direct and star in “The Golem” and its several remakes/sequels) stars as the eponymous student, a carefree, hard-living lad, until he falls in love with a local noblewoman, betrothed to her own cousin to preserve the family line. He makes a deal with a Magician, who may or may not be the Devil (and looks like sort of a cross between Georges Melies and Dr. Caligari) in order to possess her. The deal seems innocent enough – our student simply agrees to let the Magician take away his reflection in the mirror. But, this results in the existence of a dangerous doppelgänger, who seems bent on destroying the student’s happy life. Wegener really goes to town, portraying the sinister reflection and the horrified student, and there are some neat camera tricks to allow them to interact. I also noticed that the camera moves in this movie more than in most I’ve seen from the period, if only to keep up with actors as they move out of frame, which gives it a more modern feel than, for example “The Avenging Conscience.”

Run Time: Supposedly, 85 min originally. There is an 83 minute “restored” version I haven’t seen, and the one I have seen is 41 min.