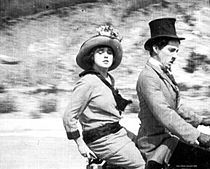 In early 1914, Charlie Chaplin (later to direct and star in such films as “The Gold Rush” and “Modern Times”) signed with Keystone Studios and started cranking out slapstick comedy shorts. In very little time, he had become a tremendous success, and remains an iconic image of American film today. This early effort is interesting in part because it is so different to the more familiar Chaplin work. For one thing, it’s about twice as long as most of the others (over twenty minutes), but more noticeably, it uses Chaplain very differently. In many of these early films, he’s morally ambiguous but curiously sympathetic, but in this one, he tries to portray a classic pantomime villain! He already has the signature small mustache (he doesn’t in all of the Keystones), but he also has a sinister dual-goatee, which is our first hint. His primary weapon at the beginning of the film is a pin, which he uses on tires, knees, and butts to mostly comedic slapstick effect, but when the going gets rough we find he has two ruffian sidekicks and a stash of round anarchist-style bombs to use. The hero of this film is Mabel Normand (also in “Tillie’s Punctured Romance” and “Mabel’s Strange Predicament” with Chaplin), a force in early teens cinema, and the co-director of this opus along with Mack Sennett, the owner of Keystone.